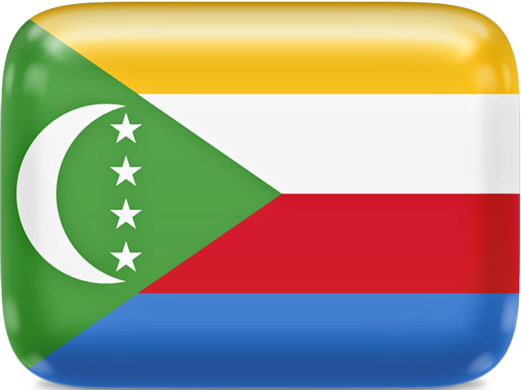 The Comoros, officially the Union of the Comoros, is an island country in the Indian Ocean located at the northern end of the Mozambique Channel off the eastern coast of Africa between northeastern Mozambique, the French region of Mayotte, and northwestern Madagascar. The capital and largest city in Comoros is Moroni. The religion of the majority of the population, and the official state religion, is Sunni Islam. At 1,660 km2 (640 sq mi), excluding the contested island of Mayotte, the Comoros is the fourth-smallest African nation by area. The population, excluding Mayotte, is estimated at 832,322. The Union of the Comoros has three official languages - Comorian, French, and Arabic. The sovereign state is an archipelago consisting of three major islands and numerous smaller islands, all in the volcanic Comoro Islands. The major islands are commonly known by their French names: northwestern-most Grande Comore (Ngazidja), Mohéli (Mwali), and Anjouan (Ndzuani). Since declaring independence, the country has experienced more than 20 coups d'état or attempted coups, with various heads of state assassinated. Along with this constant political instability, the population of the Comoros lives with the worst income inequality of any nation.