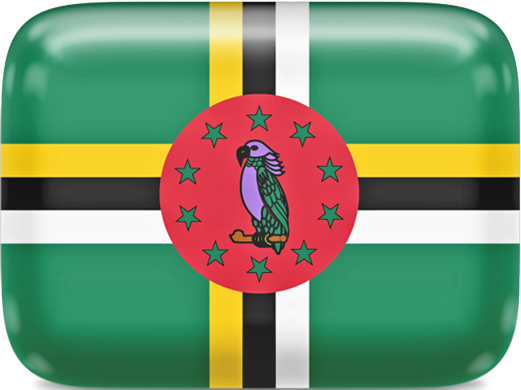 Dominica, officially the Commonwealth of Dominica, is an island country in the Caribbean. The capital, Roseau, is located on the western side of the island. It is geographically situated a part of the Leeward Islands chain in the Lesser Antilles archipelago in the Caribbean Sea. The island is located near Guadeloupe to the northwest and Martinique to the south-southeast. Its area is 750 km2 (290 sq mi), and the highest point is Morne Diablotins, at 1,447 m (4,747 ft) in elevation. The population was 71,293 at the 2011 census. The island gained independence as a republic in 1978. It is the youngest island in the Lesser Antilles, and in fact it is still being formed by geothermal-volcanic activity. The island has lush mountainous rainforests, and it is the home of many rare plants, animals, and bird species. The sisserou parrot, also known as the imperial amazon and found only on Dominica, is the island's national bird and featured on the national flag.