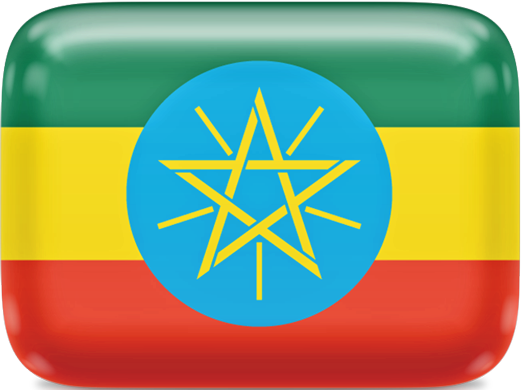 Ethiopia, officially the Federal Democratic Republic of Ethiopia, is a landlocked country in the Horn of Africa. It shares borders with Eritrea to the north, Djibouti to the northeast, Somalia to the east, Kenya to the south, South Sudan to the west and Sudan to the northwest. With over 109 million inhabitants as of 2019, Ethiopia is the most populous landlocked country in the world and the second-most populous nation on the African continent. The country has a total area of 1,100,000 square kilometres (420,000 sq mi). Its capital and largest city is Addis Ababa. Ethiopian national identity is grounded in the indigenous Amharic language, the historic and contemporary roles of Christianity and Islam, and the independence of Ethiopia from foreign rule, stemming from the various ancient Ethiopian kingdoms of antiquity. A majority of the population adheres to Christianity (mainly the Ethiopian Orthodox Tewahedo Church and P'ent'ay) whereas around a third follows Islam (primarily Sunni). Ethiopia is a multilingual nation, with around 80 ethnolinguistic groups. Oromo is the most populous language by native speakers, while Amharic is the most populous by number of total speakers and serves as the working language in the federal government. Ethiopia remains one of the world's poorest countries.